Mayor Anthony Mastrangelo accepted the award from Conservation District Manager Jo Ann McCready. Economic Development Director Matt Staniszewski and Public Works Director Michael Rooney attended the event and accepted the award alongside the mayor.  Lawrence County Conservation District Manager Jo Ann McCready told the attendees at the event that the project had started out as a pilot when the Conservation District became aware that the City’s canopy cover was inadequate for a healthy watershed. The LCCD received a small grant to start planting trees on vacant lots in the city that remained in the county repository for unpaid taxes.  As the project grew and received local, state and national recognition, the LCCD ran out of vacant lots appropriate for plantings.  Working with Mayor Mastrangelo, Matt Staneszewski, Tammy Gibson and Mike Rooney, as well as Mary Burris from New Visions for Lawrence County, more trees were planted at Deshon Ball Field, Park Avenue Playground, Cascade Park, Darlington Park, and Grant Street.

The benefits to the city are immeasurable in the areas of aesthetics, storm water runoff control, improved air quality, providing cooling and increasing property values.

As these trees grow, so do the benefits they provide.  Using the National Tree Benefits Calculator, the uptake of storm water in the trees this year is 18,000  gallons, and when the trees are mature, they will uptake 97,000 gallons in storm water.  The total value of the storm water benefits today is $2574.00.  If taken care of properly and allowed to reach maturity, this value will increase to $8620. Property values in the city have been increased by $1,300 and when the trees are mature, $2,300 from 188 small trees.

This project has been recognized and written about in local, state and national publications.

LCCD Technician Becca Naber spoke about the city’s improvements at the Cascade Street Quarry.  The quarry is a popular fishing spot in the city, but had suffered from overgrown vegetation, limited accessibility and illegal dumping.  Due to the difficult access, the Pennsylvania Fish and Boat Commission was considering no longer stocking this deep, spring fed quarry and asked the District for help.  Utilizing the Conservation District’s Dirt and Gravel Road Program and the City’s CDBG funds, major improvements have been made to the quarry including a new, wider access and parking area, storm water controls, guide rails, signage and a fishing line recycling bin.  Feedback from area fishermen as well as the Pennsylvania Fish and Boat Commission has been very positive.

In addition to the LCCD’s award, Senator Vogel presented a Certificate of Recognition to the City stating that the City of New Castle has displayed the admirable qualities of leadership, character and a passion for making our community a better place to live. Outstanding work in urban conservation, and your dedication to community has helped to restore, improve and advance New Castle to an innovative level of excellence.

The City of New Castle, through the Urban Forestry Project, has successfully transformed vacant city lots into beautiful greenspaces; thereby, property values, air quality and storm water management have improved. Additionally, by casting their sights on an abandoned quarry, the City of New Castle transformed the Cascade Street Quarry into a wonderful fishing and outdoor area for residents to enjoy. 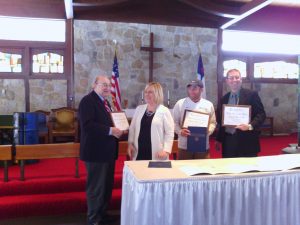 This entry was posted in News & Updates. Bookmark the permalink.