On August 3, 2015, Shelter #8 in Ewing Park (Ellwood City, PA) began to fill up with excitement as 15 campers between the ages of 9 – 11 filed in for the first day of Nature Camp. Students from six local school districts located in Lawrence, Beaver, and Erie County attended the five day camp. Each day campers learned about a different environmentally focused theme through presentations, interactive activities, and crafts.

On Monday, campers went back in time to learn how the Delaware Indians lived side by side with nature. Retired environmental educator from Mercer Conservation District, Chris Mosebach, started off Nature Camp with a Medicine Man talk. Campers eagerly listened and watched as Chris taught them about the local Native Americans that settled the area, how they started fires, protected themselves, and used plants for medicine. Later in the day, New Wilmington School District environmental science teacher, Connie White had the campers tasting everything from broadleaf plantain to edible wildflowers.

On Tuesday, campers became immersed in forestry. Local master arborist Kurtis Magnello, along with Penn State Extension Urban Forestry specialists Scott Sjolander and Brian Wolyniak taught the campers how to properly plant a tree. Later in the day, campers climbed into a harness and quickly realized just how hard it is to climb 15 – 20 feet into a large tree. For many campers, this was the highlight of the week! 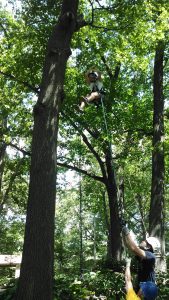 Campers suited up to experience tree canopy at eye level! 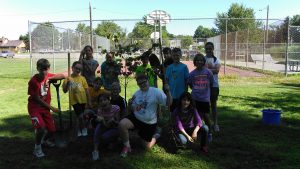 Wednesday brought on a day full of pollinator fun. Local Butler County Bee Keeper, Terry Shanor brought an entire display including live Honey Bees for the campers to learn about. During the second half of the day, Wish Upon a Butterfly, a farm located in New Castle, PA, taught the campers about Painted Lady and Monarch butterflies. At the end of the presentation campers received “Butterfly Kisses” as a parting good-bye. 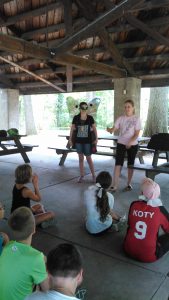 One camper dressed up as a butterfly to help learn about butterfly anatomy.

Thursday started with hammers pounding away! Campers where thrilled to be sent to work on building their own Blue Bird Box. One camper even said, “This is the first time I’ve ever got to hammer anything!” Game Commission Officer Randy Pilarcik had his hand full keeping 15 campers on track; but, all bird boxes were a success and all fingers were intact! Later in the day, campers broke out into four teams to go on a nature walk armed with binoculars, a clip board, a bird guide, and an Identiflyer to see how many different species of birds they could find along the Connoquenessing Creek and within the park. 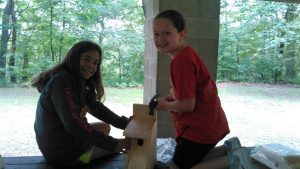 Two campers assist each other in putting together their Blue Bird Boxes!

On the last day of camp, campers spent the morning learning about Solar Energy. They built their own solar ovens out of pizza boxes donated by the local Pizza Joes. They then cooked delicious S’mores for a mid-morning snack. Campers were also able to finish up crafts and activities that had been started earlier in the week, such as bird feeders made out of recycled juice cartons. At the end of camp, all campers received an award for surviving Nature Camp 2015! 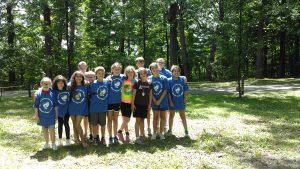 The Lawrence County Conservation District was very happy with the week’s event. Many campers were already talking about coming back for next year’s camp while the 11 year olds where desperately trying to convince us to raise the age level so that they could return!

The district plans to host its third nature camp the first week of August in 2016. Again the number of participants will be capped so as to maintain the hands on experience for all students.

This year’s camp was funded by a Department of Environmental Protection Environmental Education Grant and a donation by McElwain Motor Car Company.

This entry was posted in News & Updates. Bookmark the permalink.